The project area on which the multifunctional residential complex is located is Poti, on the right bank of the Rioni, in particular, at the intersection of Chkheidze Street and Nikoladze Beach, opposite the April 9th Alley. The mentioned area is 8996382642 sq.m. and is adjacent to the recreational and residential areas. The area is characterized by flat terrain and does not require additional excavation works to be done. It should be noted that the recreational zones near the territory (Nikoladze beach, April 9th alley,river Rioni) are a good source of aeration for a given area, and residential zones located to the north and west, organically write the given multifunctional residential complex in the already existing local city block. The shape of the project area of the given location is trapezoidal, which gave us a better perspective on the development of the shape of the building. Conceptually, the inspiration for the shape and style of the building is the port of Poti, while the technical elements of the ships are transported and used in the form of construction details: the window shape - a porthole, the crane supporting structures - the elements of building safety measures due to humid climate of the region. The land consists of three main parts: interactive front yard, building, multifunctional inner yard. The multifunctional residential complex consists of building blocks that, through a rhythmic increase in height and length, encircle the cycle of other city blocks on the street and its top floor, on which is a commercial space in the form of Cafe-Bar "Poti Veranda" (67 sq.m. with the roof, 267 sq.m. without the roofing), is the culmination of this dynamic. In addition to the public commercial space in the last block, there are also two floors of office space. There are 2 types of apartments (43 sq.m. and 97 sq.m.) in four-storey, three-storey and two-storey blocks. The spaces of one-storey building blocks (130 sq.m.) are the driving commercial elements of the given multifunctional complex: the pharmacy, bank, market, gym. Due to the symmetrical diagonal to the axis line of the building, both wings of the building are naturally lit during the day. Such an arrangement also facilitates ventilation issues and makes it easier for the area to maintain the desired climatic conditions on the bridges connecting the existing blocks. On the territory of the front yard there is an interpreted mini-version of the water circulation system typical for the city of Poti, which serves not only the decorational purpose, but also the function of water supply for landscaping. A similar principle applies to the green bridge connecting the two blocks of the project building, which has functions of social activities, recreational elements and relaxation space. This adds another layer of greenery to the building ecosystem, in addition to a kind of mini-oasis created on the ground surface. On the roof of the building are located solar photovoltaic elements, in the form of a system of panels, thst helps to increase energy efficiency of the area.This has a positive impact not only on eco aspects, but also on operating budget and project attractiveness. The multifunctional complex is executed in an industrial style, with elements of sustainable architecture. The white cladding of the façade with Caucasian limestone/plaster, the metal construction of the fire escape staircase, the lining of the elevator cell with specially pollished rust plates creates a subtly contrasting environment, as well as the brutal character of the style combined with the details of the greenery. 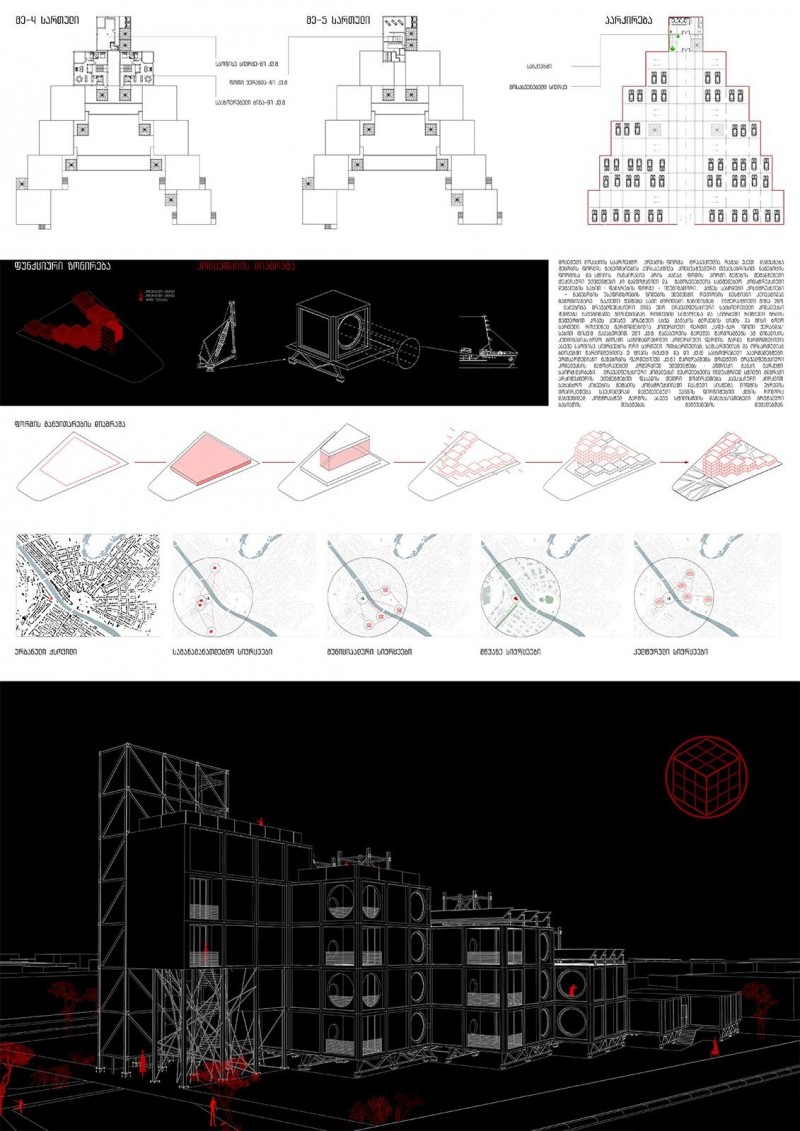 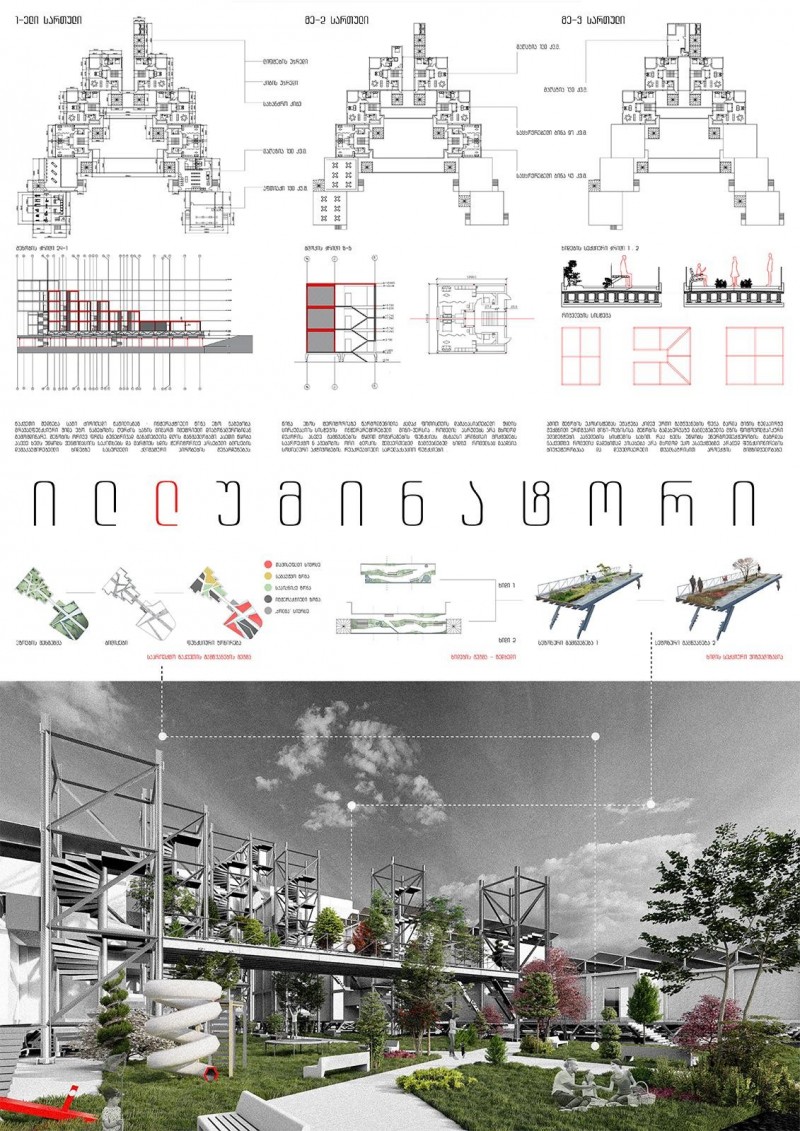 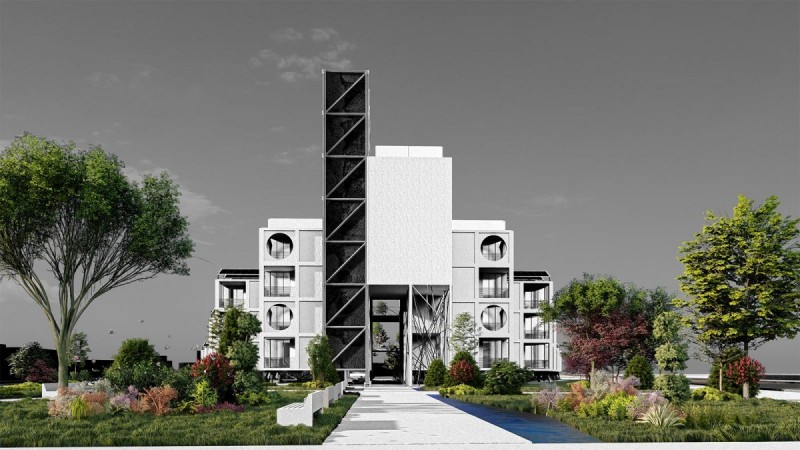 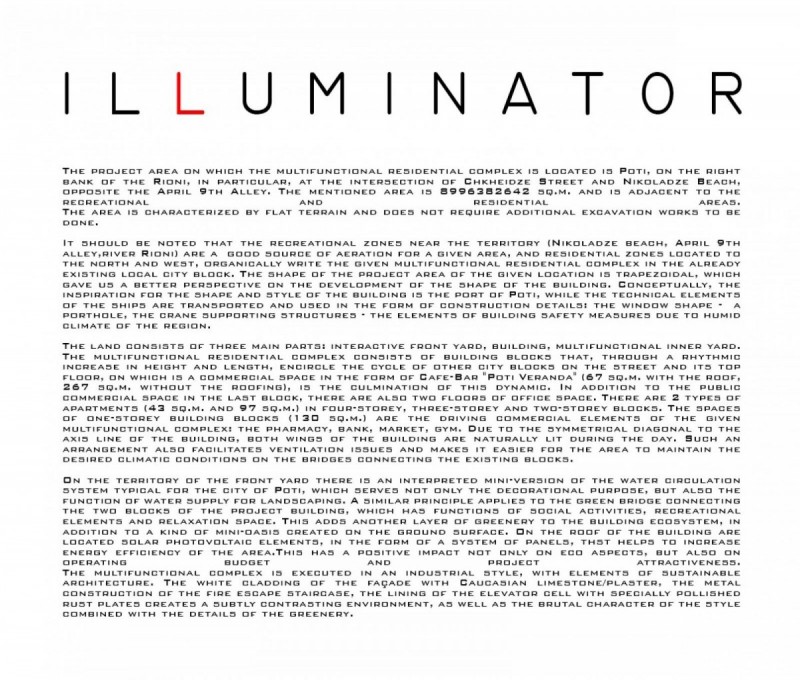 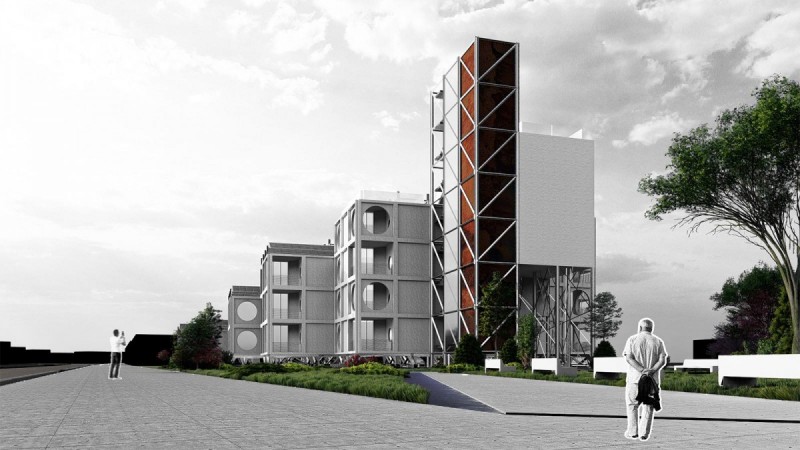 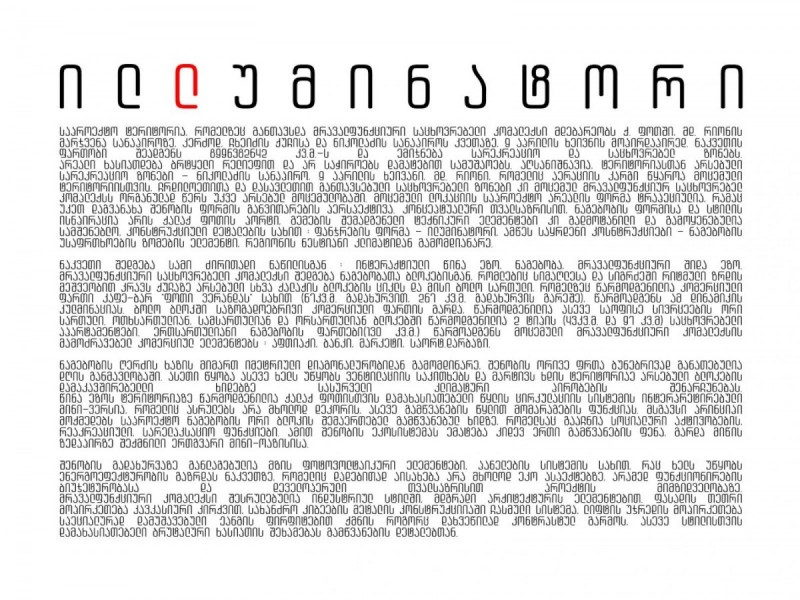 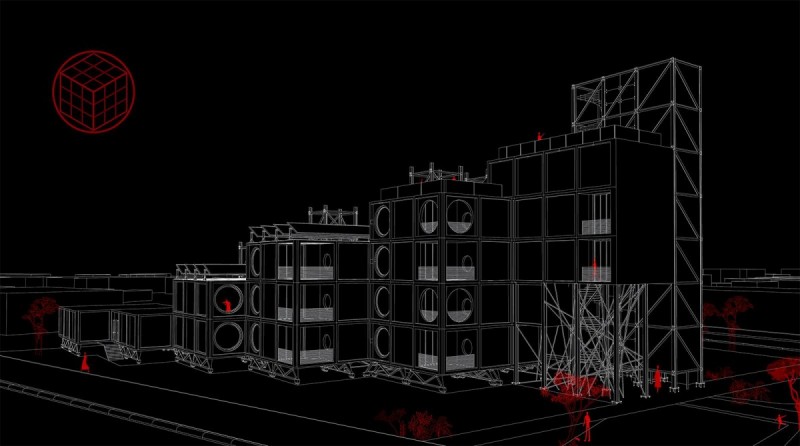 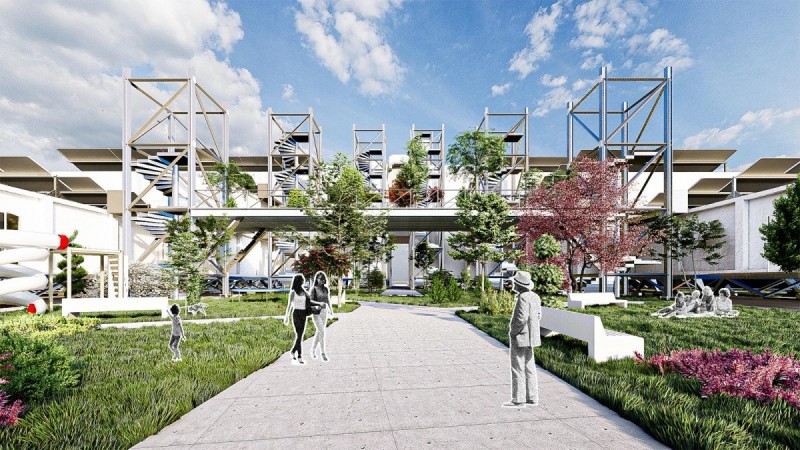 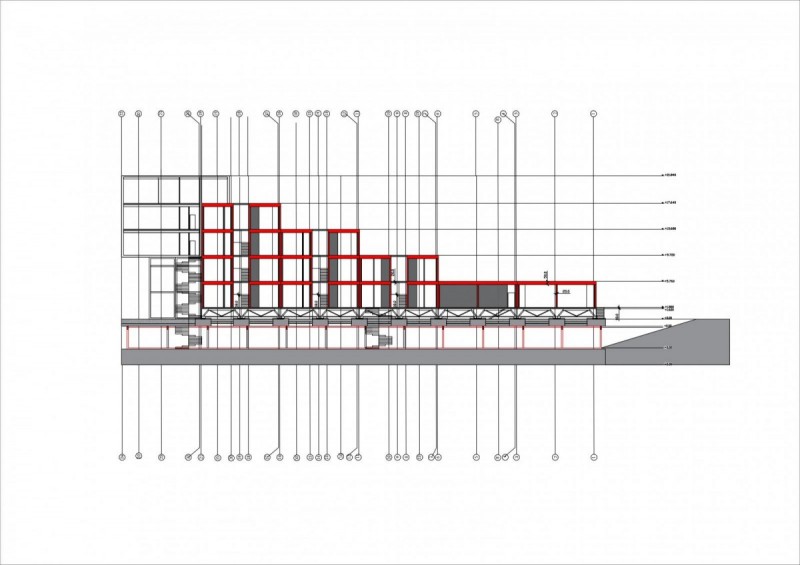 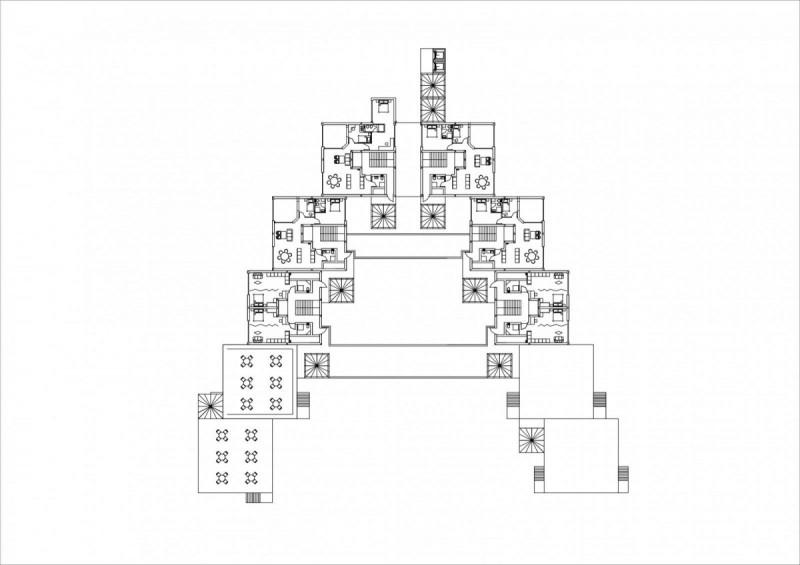 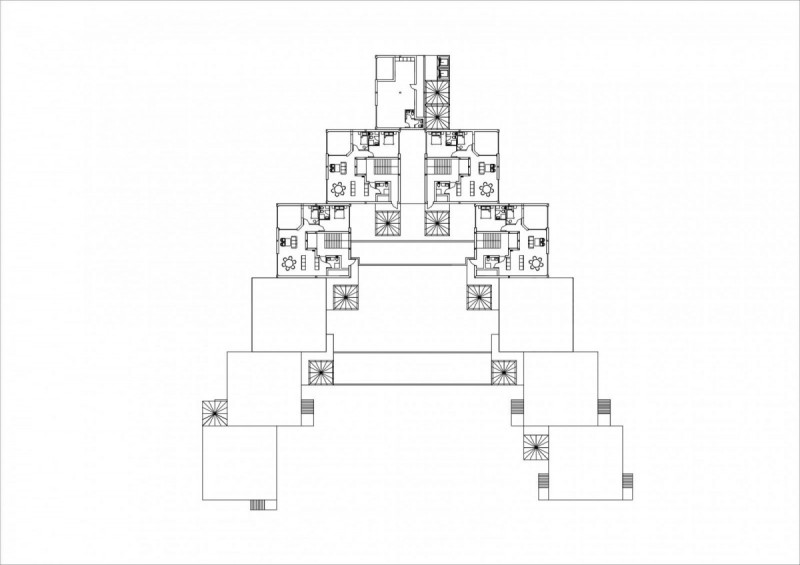 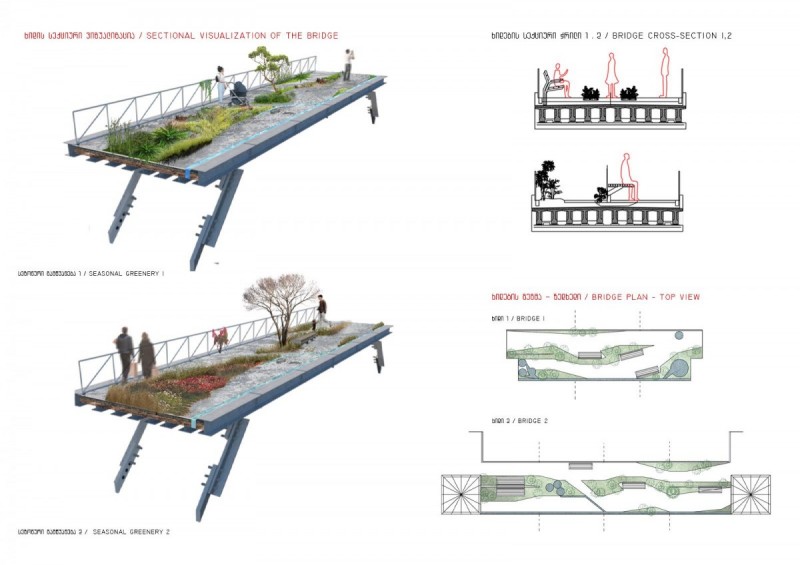